After initial postponement due to the pandemic, the 93rd Academy Awards ceremony has finally taken place in Los Angeles.

Continued restrictions caused by COVID-19 meant that the ceremony took place across several venues, and even had a UK “hub”.

Even aside from pandemic disruptions, the much-anticipated event was like no other, representing a record-breaking year for diversity among nominees. Several prominent winners suggest a shift in attitudes for the Academy.

For the first time in history, two women were nominated for the best director award, and Chloe Zhao becomes not only the first woman of color to be nominated but also the first Chinese and Asian woman to win.

Youn Yuh-Jung also made history by becoming the first Korean person to win an acting Oscar. She took home the best-supporting actress award for her role in Minari.

Emerald Fenell became the first woman to win for the best original screenplay in 13 years for Promising Young Woman.

And Daniel Kaluuya becomes the first non-white British person to win an award for acting for his role in Judas and the Black Messiah.

This doesn’t erase the broader lack of diversity that the Oscars and other big awards ceremonies have long suffered.

For example, at least four men have been nominated for best director in every other year of Oscar history, women still only account for 6% of the nominees.

No black person has so far won an Oscar for directing (although there have been winners of color), and only 34 acting awards have gone to performers of color in 92 years.

But it does seem as though 2021 could be a year of change where the hard-fought gains of #OscarsSoWhite and #MeToo are beginning to emerge.

This has also been helped along by the effect of a global pandemic on film release strategies, with streaming platforms now being the primary way that new movies are viewed.

A FAR CRY FROM 2015, WHEN A SUSTAINED LACK OF DIVERSITY AT THE OSCARS LED TO CALLS FOR CHANGE THROUGH THE #OSCARSSOWHITE CAMPAIGN. KATHY DEWITT/ALAMY

Greater diversity was apparent this year from the announcement of the Oscar nominees. Numerous actors of color were tipped for the big awards, with LaKeith Stanfield recognized alongside Kaluuya in the best supporting actor category and the late Chadwick Boseman a key challenger for best actor alongside Riz Ahmed. Viola Davis and Andra Day were also nominated for best actress.

The BAFTAs, held earlier this month, also offered a more diverse suite of nominees and winners than in any previous year. Zhao, Kaluuya, and Fennell won BAFTAs in their respective categories.

And Bukky Bakray’s Rising Star award for her role in Rocks and Ang Lee’s BAFTA Fellowship were also evidence of a shift away from the 2020 awards, where BAFTA made headlines for its overwhelmingly white and male list of nominees.

Still, it seems that this season, the awarding bodies have taken heed of claims of discrimination and whitewashing and that just maybe this is a step forward for the film industry.

Yet, before we’re too quick to celebrate these gains, it’s important that we reflect on the many ways in which this has been an atypical year for the film industry.

The pandemic has had a significant effect on the global film industry. Various “big” films of 2020/21 have either delayed-release or opted to go straight to streaming services.

As a result, COVID-19 seems to have worked as a great leveler in terms of opportunities for underrepresented artists.

This has been helped by the fact that the Oscars has, for the first time, allowed entries from films not released in theatres.

The dominance of streaming services in the pandemic has given greater visibility to those filmmakers who are more likely to make deals with these platforms.

Women, filmmakers of color, off-beat, and niche films have higher profiles than in previous years when cinema releases have overshadowed smaller productions.

Netflix ended up winning a record seven Oscars this year, including for Ma Rainey’s Black Bottom and the short film Two Distant Strangers, both of which feature black lead characters. 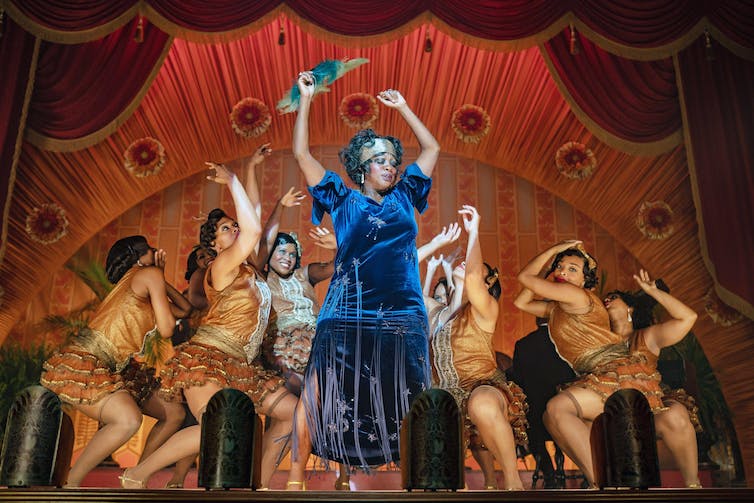 As a recent report by the Annenberg Institute demonstrates, Netflix’s output is more diverse than the industry as a whole, offering opportunities to filmmakers who might struggle within the Hollywood system.

For these filmmakers, the pandemic hasn’t necessarily changed experiences of distributing films, but it has provided a more receptive audience unburdened by the mainstream fare of multiplexes.

Of course, the release strategy of a film doesn’t necessarily affect Oscar-worthiness. And the Academy has stated that films submitted for awards in future years will once again need a brief theatrical run in order to be eligible.

As such, the leveling of the playing field seems to be accidental. The outcome, though, is that films that have their wide release on streaming platforms have not been overshadowed by big cinema releases this year.

The 2021 awards season marked an important shift at the end of an unprecedented year. There’s no doubt that a combination of industry initiatives and the challenges posed by the pandemic have led to this increased diversity.

This may have been accidental - offering increased visibility to smaller films making deals with streaming services while the bigger releases wait for cinemas to reopen.

If awarding bodies are able to continue to focus on those smaller, more diverse films once cinemas reopen this might just be the beginning of Hollywood’s new normal.

This story was originally written by Claire Jenkins, Lecturer in Film and Television Studies, University of Leicester, for The Conversation.