As the planet warms, it isn’t just humans who are feeling the heat — trees are too. Rising temperatures are disrupting a primary engine of life on Earth: photosynthesis.

A recent study from Brazil adds to fears that climate change is altering the face of the planet. Literally. Tropical forests could look more and more like deciduous forests or savannas in the future, according to the research-based on Brazil’s Cerrado biome. This ecoregion adjacent to the Amazon Rainforest is where savanna, grasslands, and forests mingle.

The paper, published in Environmental Research Letters in March, focused on four trees species found in both the Amazonian tropical forests and savanna land: Qualea parviflora, known as pau–terra in Portuguese; Pseudobombax longiflorum, or the Brazilian shaving-brush tree; Hymenaea stigonocarpa (jatobá do Cerrado); and Vatairea macrocarpa, also known as angelim.

Krause, who was not involved with the study, noted that the paper underlines how “increased number of extreme heatwaves, often combined with drought stress,” compound the heat stress faced by trees.

The maximum temperatures in the Cerrado region and neighboring forests can reach 45° Celsius (113° Fahrenheit). The area has warmed perceptibly in recent decades, and heat waves that regularly sweep the region are becoming hotter and dryer.

How much a leaf warms depends on how much solar radiation it absorbs and what it loses through conduction and long-wave radiation. Leaves facing the harsh tropical sun heat up faster than the ambient air around them. 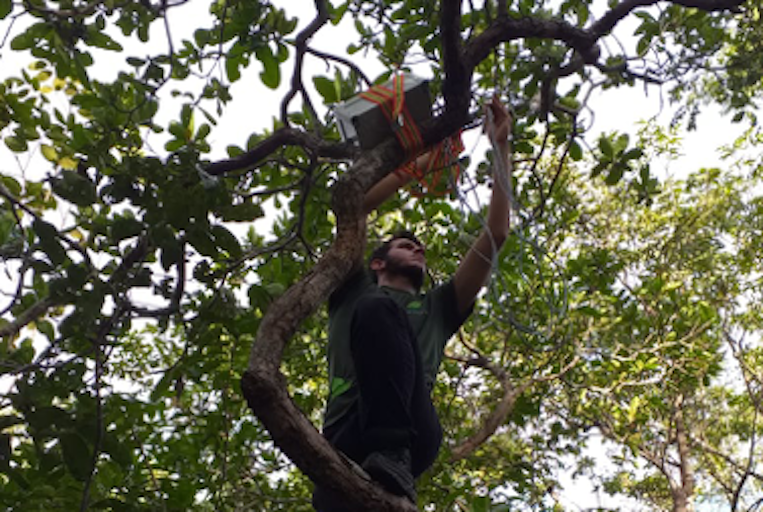 The disproportionate warming in the Cerrado belt is driven not just by global temperature rise, but also by local deforestation and fragmentation of wooded areas. As pastureland and cropland have eaten away into forests, their cooling effect is becoming muted.

Trees cool themselves and areas around them by transpiring water through the stomata dotting their leaf surfaces. This process, along with evaporation, is also why forested areas induce rainfall. “One single adult tree in the Amazon can transpire up to 1000 L [264 gallons] of water per day, functioning as a natural air conditioner of the environment. This process is called biotic pump, which is reduced by deforestation,” Araújo said.

When faced with scorching heat and dry spells, the pores on leaves clamp shut to conserve water. “This will reduce or prevent transpirational cooling of leaves, causing substantial increases of leaf temperature above air temperature,” Krause said.

The study estimated, for the first time, what temperatures leaves can tolerate. To do this, the authors calculated the temperature at which a critical component of the photosystem breaks down and the temperatures that leaves are experiencing. The difference between the two levels is called the thermal safety margin (Tsm).

Krause said he expected that the temperature at which scientists observe permanent damage to leaf tissue to be higher than what the researchers estimate. This would mean a wider safety net, but it still would not be enough to protect most species considered in the research, given the current pace of warming.

Such a hostile environment is dangerous for leaves and trees. The tree is not shedding leaves as part of a seasonal cycle but rather because they are not performing their function of harnessing energy.

The authors found that in some species, the maximum leaf temperatures are already exceeding this threshold. But if average temperatures rise by even 2.5°C (4.5°F), this will be true for most tree species, they estimate. With a 5°C (9°F) rise, all tree species studied will suffer from leaf burn.

According to Krause, there is a reduction in the CO2 absorbed by plants even at temperatures lower than those that short-circuit photosynthesis. “Such reduction will contribute to the reduction in carbon sink of the tropical forest,” he said.

At the moment, savanna species adapted to higher temperatures are doing better than the rainforest species. “Our results thus indicate expected shifts in deciduousness in the future and thus a trend towards savanna vegetation replacing forests in the regions in Southern Amazonia characterized by large patches of deforestation,” the authors write.

What is happening at the Amazon-Cerrado boundary may be a precursor for feverish tropical forests across the world. Unlike humans, these forests won’t have air conditioners or sunscreens to protect them.

(Banner Image: Ranchland and Cerrado in Brazil. Image by Rhett A. Butler/ Mongabay.)

Malavika Vyawahare is a staff writer for Mongabay. Find her on Twitter: @MalavikaVy